In the short term, Appalachian Headwaters will conduct restoration on approximately 2,500 acres of mined land by ripping compacted soils open to loosen, so seedling trees of native hardwood forests can take root, returning these disturbed sites to deciduous forest more closely resembling the natural forest that once thrived here. At the same time, stream channels affected by past mine activity will be restored as well. The Mammoth tract will be a demonstration of new technology, and mammoth dreams.

The remaining 2,500 acres on the tract is still nicely forested. WVLT is evaluating the recreational potential of this site for hikers, mountain bikers, and other trail users. Working with the Upper Kanawha Valley Tourism Project, and specifically the towns of Smithers and Montgomery, the Land Trust’s Mammoth site will offer a destination that complements the riverside redevelopment of these small towns, aiming to reinvigorate the local economy with tourism visitation and to expand area residents’ opportunities for recreation. 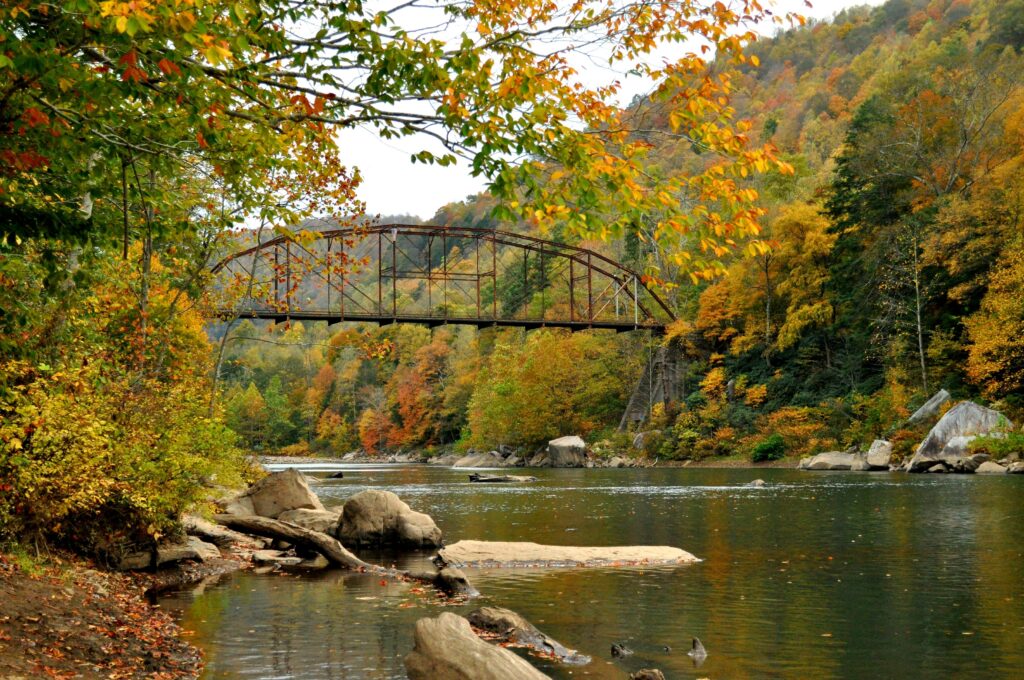 The Jenkinsburg tract is well-known for its “high bridge”, and swimming areas along the Cheat River and Big Sandy Creek, including “Blue Hole”. WVU students, locals, whitewater enthusiasts, hunters, and hikers frequent the area.

Historically, Jenkinsburg was a small a logging town. The Jenkinsburg Bridge was built in 1912 by the Canton Bridge Company, and is an example of a rare design, known as a pin-connected Pennsylvania through-truss bridge. Canton Bridge Company became American Bridge Company, one of the nation’s biggest bridge-builders during the early 20th century and has numerous structures listed on the National Register of Historic Places. A corner of the property abuts the bridge.

We are partnering with Friends of the Cheat on the site management. Please support this effort by donating today and selecting Jenkinsburg Recreation Area on your gift designation.

You can view this property from the Bickle Knob Fire Tower located on Stuart Memorial Drive, which is just minutes from Elkins, if you set out traveling on Route 33. Stuart Memorial Drive is a 10-mile drive through the Monongahela National Forest which encapsulates so much of what is unique and representative of these public lands – spectacular views from the Bickle Knob Observation Tower, unique limestone geology, trailheads into Otter Creek Wilderness Area, iconic red spruce forest, luxurious roadside rhododendron blooms, a quaint campground, the Bear Heaven rock house and boulders, and a rich Civilian Conservation Corps history with a monument dedicated to Franklin Delano Roosevelt. This place has it all!

In the fall of 2016, WVLT purchased a historic Civil War site in Pocahontas County, known as Camp Bartow. The property was the scene of the Battle of Greenbrier River in October 1861. The 14-acre property lies in the heart of the battlefield and was a campground of the 31st Virginia Infantry. As part of the first campaign of the Civil War, the battle proved instrumental in the creation of West Virginia in 1863.

The preserve was deeded to the WVLT in 1995. The WVLT manages the property under guidelines outlined in the deed which require keeping the property in its natural condition while accommodating hiking and nature study.

Volunteer Opportunity!
Are you interested in volunteering? We are scheduling several work days for the spring and summer. Please call (304) 413-0945 or email jcecil@wvlandtrust.org to sign up!

Unique habitats for rare, threatened, and endangered plants and animals, including:

The property links to other public lands, including the Gauley River National Recreation Area and Carnifex Ferry Battlefield State Park. It is historically unique as the location of a Confederate retreat during the Civil War.

The Marie Hall Jones Ancient Forest Preserve is a 190-acre property in Doddridge County, which will be open to the public as a nature preserve in the near future, after parking and access have been developed.

Allen Jones donated the property to the West Virginia Land Trust (WVLT) in 2016, to uphold his mother’s wishes to see that this untouched forest be protected forever. The natural features include a seasonal stream and a 15-acre stand of old-growth trees, ranging from 160 – 300 years of age.

WVLT manages the property under guidelines outlined in the deed, which require keeping the property in its natural condition, while accommodating hiking and nature study.

The Yellow Creek Preserve is 860 acres in Tucker County that adjoins the Canaan Valley National Wildlife Refuge and Little Canaan Wildlife Management Area. The property is named after a tributary of the Blackwater River that flows through the property. The property also includes Moon Rocks, a rock formation that is a popular destination for hikers and mountain bikers.

The tract contains 3+ miles of the Moon Rocks-Hoodoo Rock loop trail, and links to 20+ miles of the Heart of the Highlands Trail System. Trail access to the Yellow Creek Preserve can be made from the parking area at the National Youth Science Foundation building off Appalachian Corridor H just north of Davis, or from Camp 70 road at the south end of the Tucker County town. 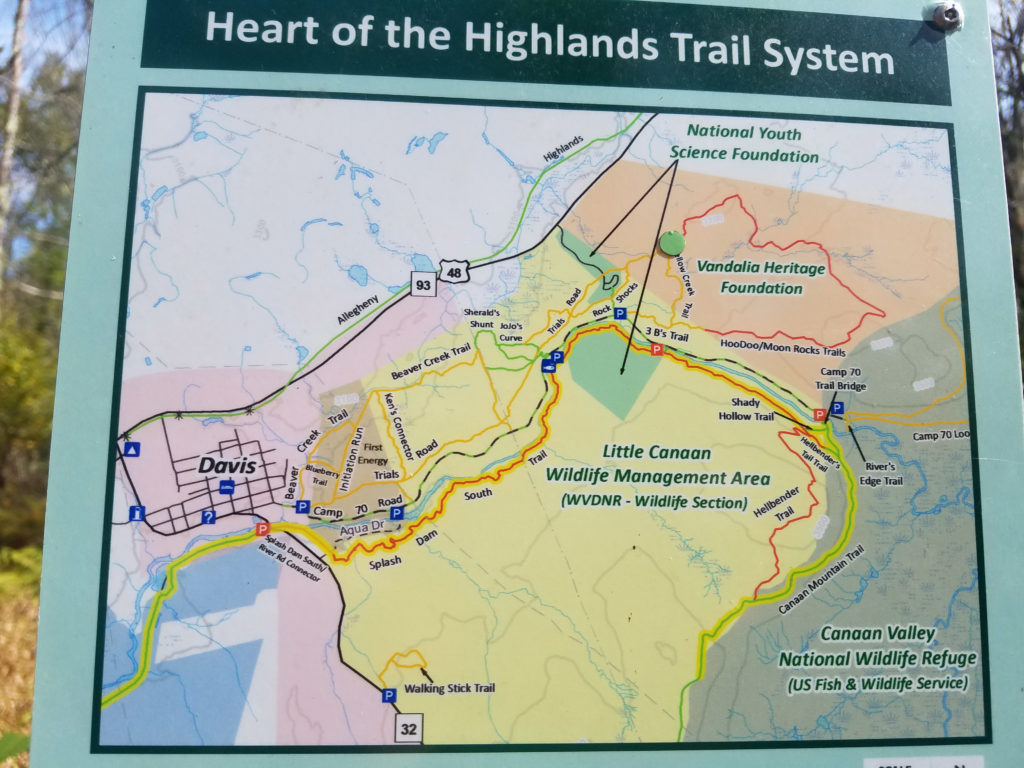 While we now own the property, we still need funds for management, expanding the trail system, and ecological restoration. Do you love Moon Rocks at the Yellow Creek Preserve? Please consider a donation.

A new destination for outdoor enthusiasts was permanently protected in Fayette County!

The West Virginia Land Trust partnered with the City of Oak Hill to purchase 283 acres of land for public recreational use. The future is exciting as Oak Hill prepares to open this “outdoor recreational mecca” for climbing, hiking, and mountain biking that will add yet another option for tourism in the New River Gorge Region. This property is packed with natural rock features, including a nearly 2-mile long rock wall, which makes this new destination worth the hike to visit.

Two islands in the Ohio River were donated to the West Virginia Land Trust and will be protected as essential habitat for years to come.

The shallow waters of the river can provide quality habitat for freshwater mussels, including endangered species, such as the pink mucket and fanshell. Bald eagles, peregrine falcons and Indiana bats also use islands along the river as habitat.

With much of the islands submerged underwater, WVLT will work with U.S. Fish and Wildlife Service and other partners in upcoming years to stabilize stream banks and restore habitat. In addition to the long-term benefits to fish, wildlife, and other habitats, this land protection effort will also help improve water quality and maintain the ecosystems that offer public recreational opportunities for people in the Ohio River Valley.

Floodplain forest species, including sycamores and cottonwoods, exist in narrow swaths along the preserve’s stream banks. Restoring and expanding them will contribute to improved water quality in the South Fork and the South Branch of the Potomac, which flank the property, as they flow to the Chesapeake Bay. As a recreational resource, the preserve has potential not only for the immediate community, but also for travelers who access the area from the Washington, D.C. metropolitan area via Corridor H.

With one of the few known barn owl nesting sites in West Virginia, as well as lowland fields, stream frontage, and wetland habitats, the Hardy County property easily lends itself to nature watching. The ‘sloughs’ (pronounced “sloos”) are an especially interesting feature of the Poppy Bean Preserve. As ‘off-channel habitat,’ these slow-moving backwaters provide an environment for smaller fish and other aquatic species to escape high flows and avoid predation in the main river.

Just 10 minutes south of Morgantown, you will find 320 acres for hiking and nature study!

History of Toms Run Preserve…
Elizabeth’s Woods (our first nature preserve) was donated to the Land Trust in 1995 for the purpose of recreation and nature study. In 2017, the organization was able to purchase two neighboring properties expanding the preserve to its current size. Plans are underway to build trails on the undeveloped areas.

While the preserve is now open, trail building and work continues! We welcome newcomers who want to get involved! Call our office at (304) 413-0945 or email rick@wvlandtrust.org.

The Wallace Hartman Nature Preserve is a 52-acre natural area located minutes from downtown Charleston, W. Va. Trails are established on the property and are open to the public.

WVLT owns and manages the property for recreational and educational opportunities, habitat protection, and scenic enjoyment.