Jessica Spatafore, Director of Development & Communications at (304) 413-0945 or email jessica@wvlandtrust.org

Property Transferred to the City of Oak Hill

Continuously adapting, expanding and trying new approaches has become the norm for businesses which want to survive in today’s economy.

The City of Oak Hill cut the ribbon Tuesday on Needleseye Park, a rock climbing, hiking and mountain biking park on a large tract of land around the Minden area. The West Virginia Land Trust partnered with the city to purchase 283 acres of land from Berwind Land Co. for public recreational use.

While offering her thanks to the various entities involved in the process, Ruby thanked “most importantly, the community here, because you all have such a strong community when it comes to outdoor recreation, when it comes to tourism.”

When she attends events involving people in the region, Ruby said she knows there are going to be people who are passionate about tourism, growing the tourism economy, and outdoor recreation in the area.

“Day in and day out, you guys are the people who are on the ground.”

Ruby said Gov. Jim Justice’s administration has expanded the duties of the tourism office to include economic development, to look at ways to grow the state’s tourism economy.

“Those are the reasons that we are all here today. It’s projects like this; it is growing the economy and adding new things to our list to promote.”

Outdoor recreation is consistently one of the main draws in the state, she said. 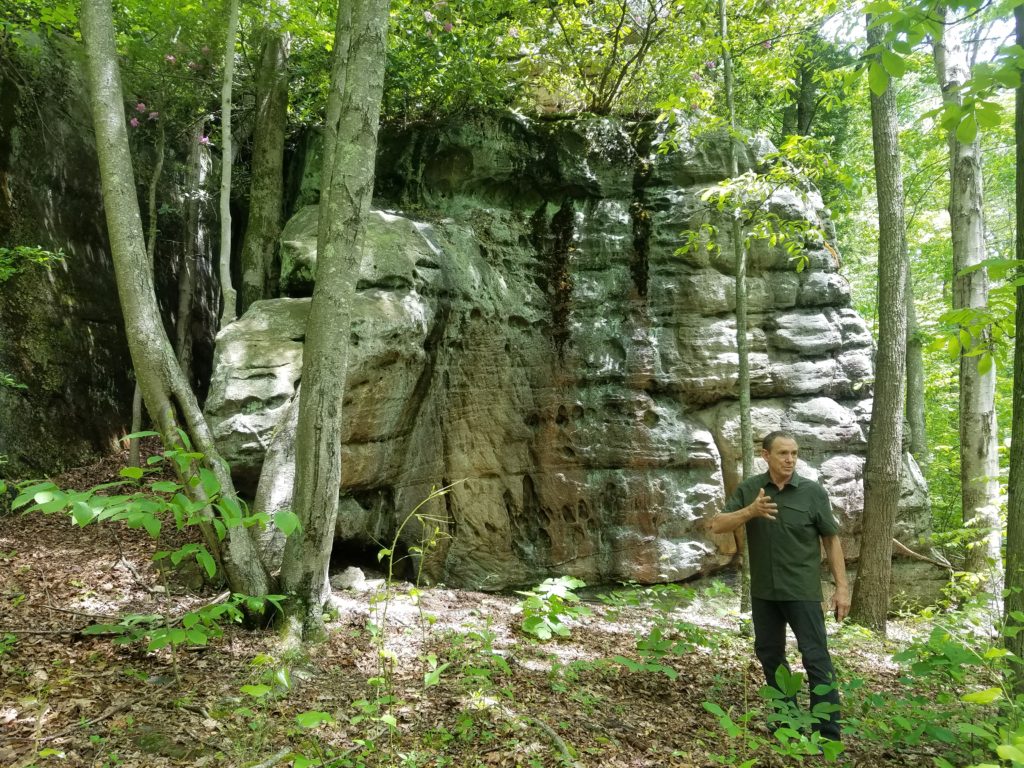 “When climbing really started to take off in the ‘80s here, people, of course, started off near the (New River Gorge) bridge,” recalled Gene Kistler, president of the New River Alliance of Climbers. “This place eventually got discovered here in the ’90s.

“We climbed here in the ’90s for maybe a couple of years, then maybe it was the Meadow River that everybody went to. It’s fun to discover things.”

“We knew about this place, and it’s just a brilliant move on the part of the City of Oak Hill to buy this and do this,” Kistler continued. “There’s a short list of cities in the U.S. that have climbing within the city limits, and it’s a prestigious list. And Oak Hill’s part of that now.

“What’s really nice about Needleseye is its exposure for winter climbing and for being here in the winter time. Frankly, summer time in Needleseye Park is kind of brutal. It’s going to be interesting to come up with ways to sort of mitigate that. But I think it’s gonna be primarily sort of a fall, winter, spring (best scenario).”

Kistler says the park offers a variety of options, including bouldering — “People are psyched.” 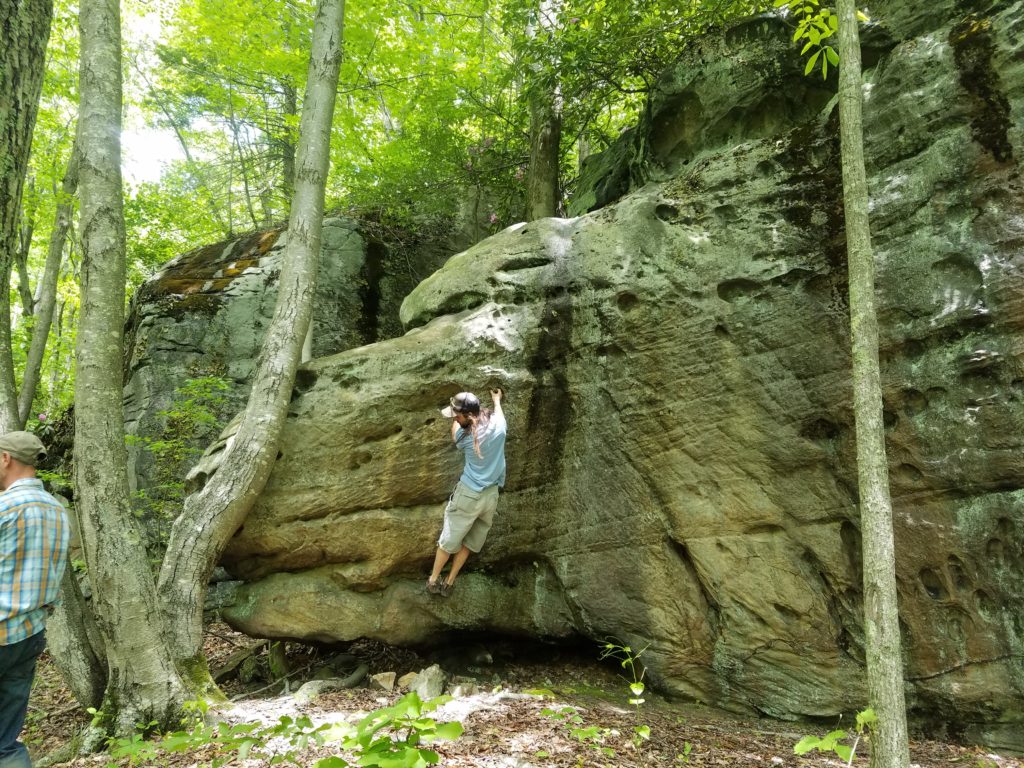 Brent Bailey, executive director of the West Virginia Land Trust (WVLT), said the fact that the project was locally-generated was a key.

“When we select projects, we’re looking for local buy-in,” Bailey said during a media hike before the ceremony. “This was an easy buy for us.”

According to Bailey, the WVLT seeks to get involved with projects that will provide public benefit such as protecting water supply, providing recreation and preserving history.

After exploring the title on the land and other areas such as mineral issues and boundaries, the WVLT wrote a proposal to move the project along. Needleseye features “beautiful West Virginia woodland and spectacular rock formations,” he said.

Hannabass termed Tuesday “a fantastic day for the City of Oak Hill.” Initiated in March 2016, the Needleseye project “moved at lightning speed,” he said.

Mayor Fred Dickinson and city council threw their support behind the project, and the WVLT and the state’s Outdoor Heritage Conservation Fund came on board, as did other partners.

“You have to have multiple partners. You can’t do this as one entity,” the city manager said. 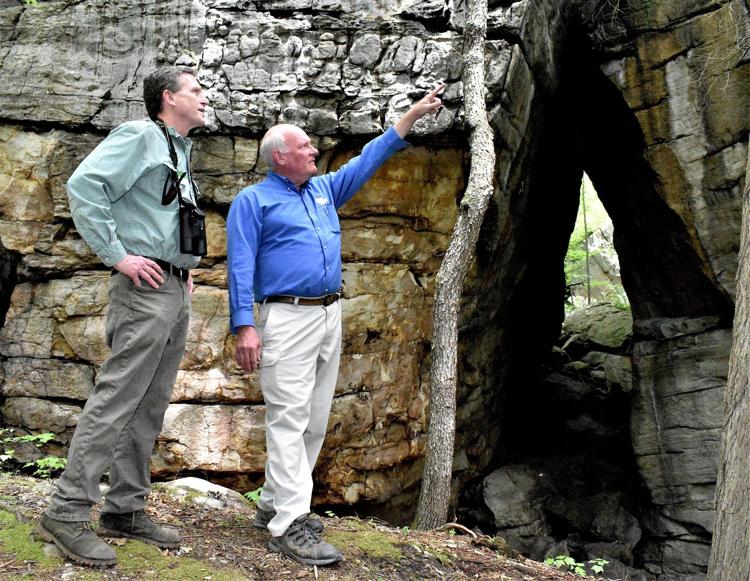 He said the project cost has been around $600,000, with the city and the WVLT contributing some funds, but the bulk of the money coming from the Outdoor Heritage Conservation Fund in the form of a grant to purchase the property from Berwind.

“Outdoor recreation is extremely important to our state,” said Jessica Spatafore, WVLT’s director of development and communications. “In addition to benefiting our current local residents and their health, outdoor rec opportunities strengthen our economy by increasing tourism, attracting new businesses and boosting the housing market.”

With the parking lot and access now available at the north entrance, other future work includes signage and creation of a south entrance, said Hannabass.

“There will be some more amenities to come,” as well as promotion of the park, he said. 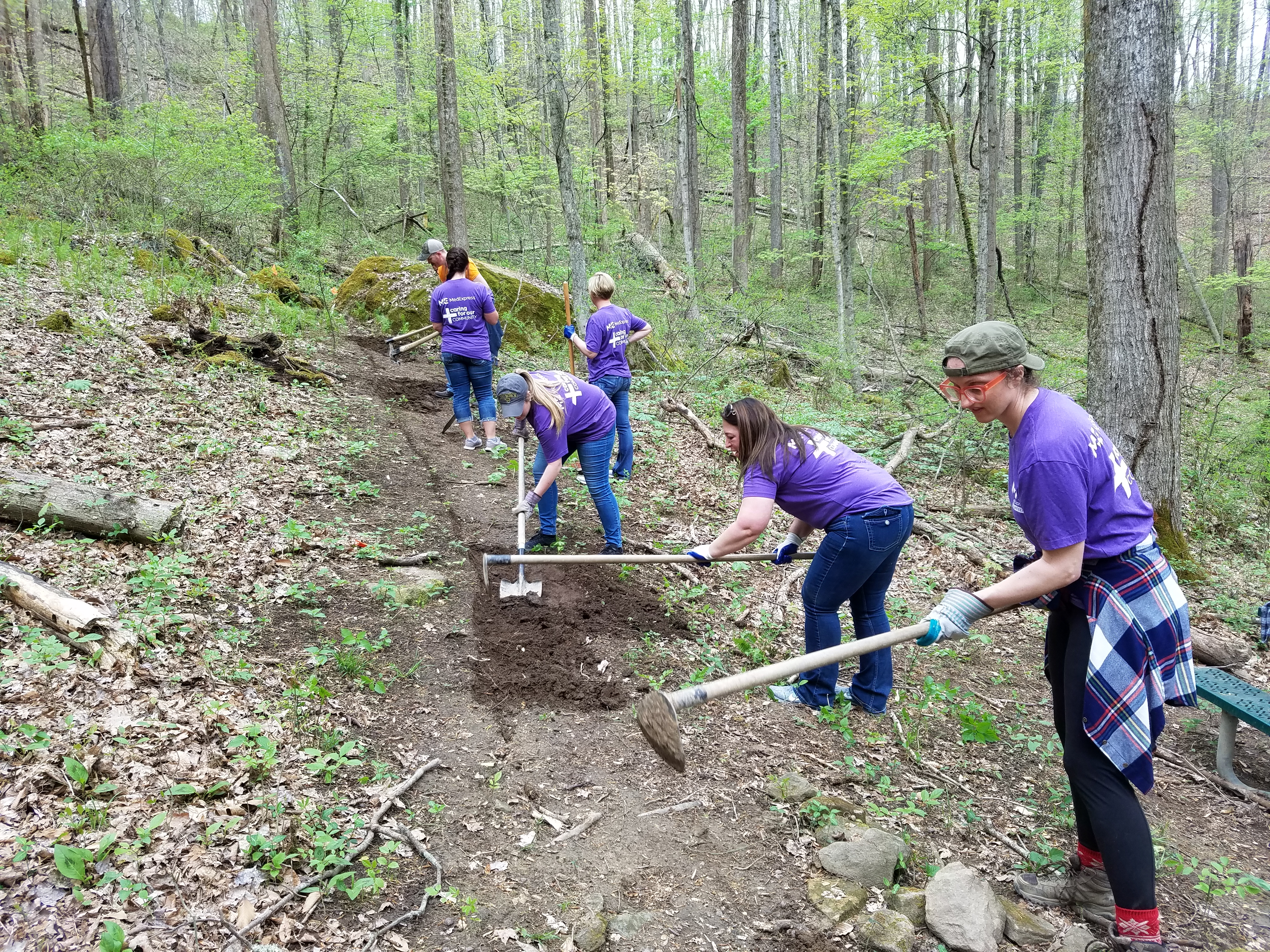 “Outdoor recreation is extremely important to our community,” said Jessica Spatafore, WLVT director of development and communications. “In addition to benefitting our current local residents and their health, outdoor rec opportunities strengthen our economy by increasing tourism, attracting new businesses, and boosting the housing market.”

MedExpress center volunteers from Morgantown worked in the Toms Run Nature Preserve, which is a 320-acre natural area. The property is a “work in progress” and WVLT is planning to make it open and accessible to the public for hiking and nature study in the fall of 2019.

Volunteers from the Charleston MedExpress center met in the Wallace Hartman Nature Preserve. This 52-acre natural area has established trails and is open to the public. The preserve offers recreational and educational opportunities, habitat protection and scenic enjoyment.

MedExpress employees were able to volunteer with the WVLT through the MedExpress Volunteer Program in which team members can take a certain amount of time off to volunteer in their community with an organization of their choice.

Those interested in visiting either property or volunteering should call WVLT at (304) 413-0945. 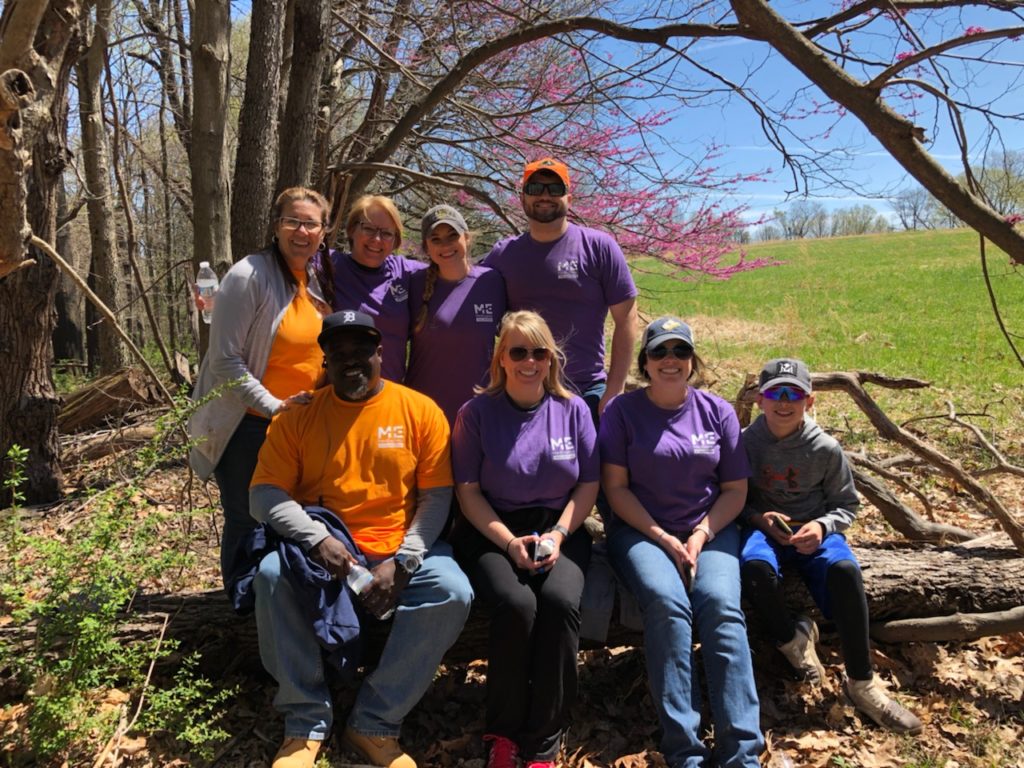 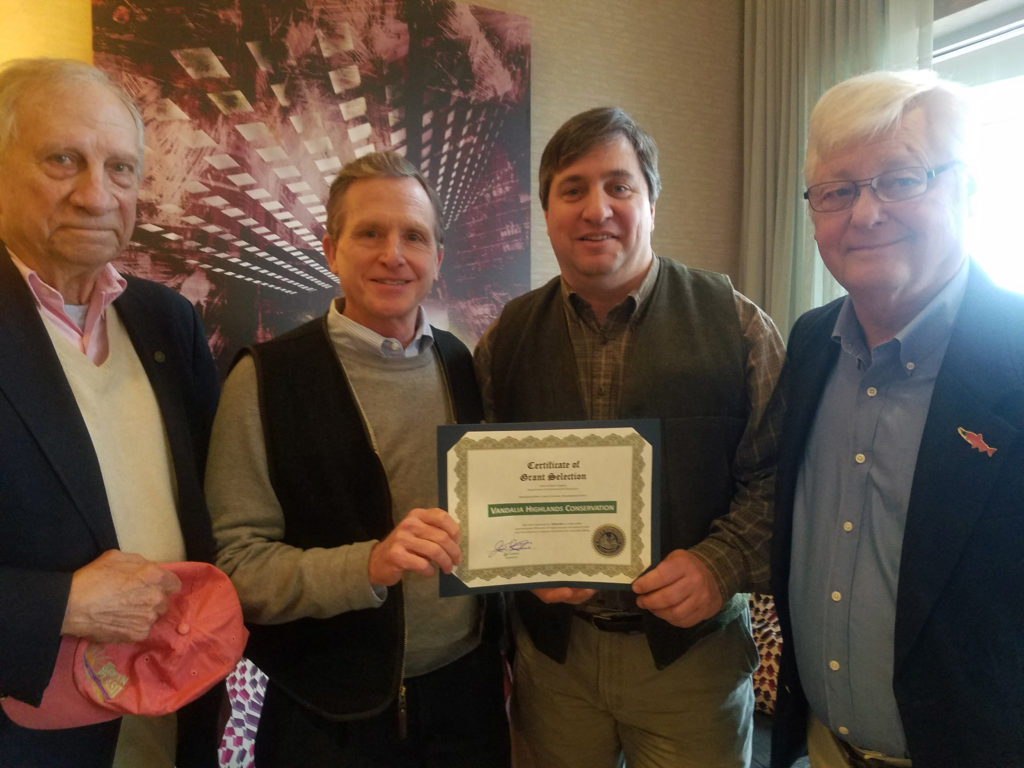 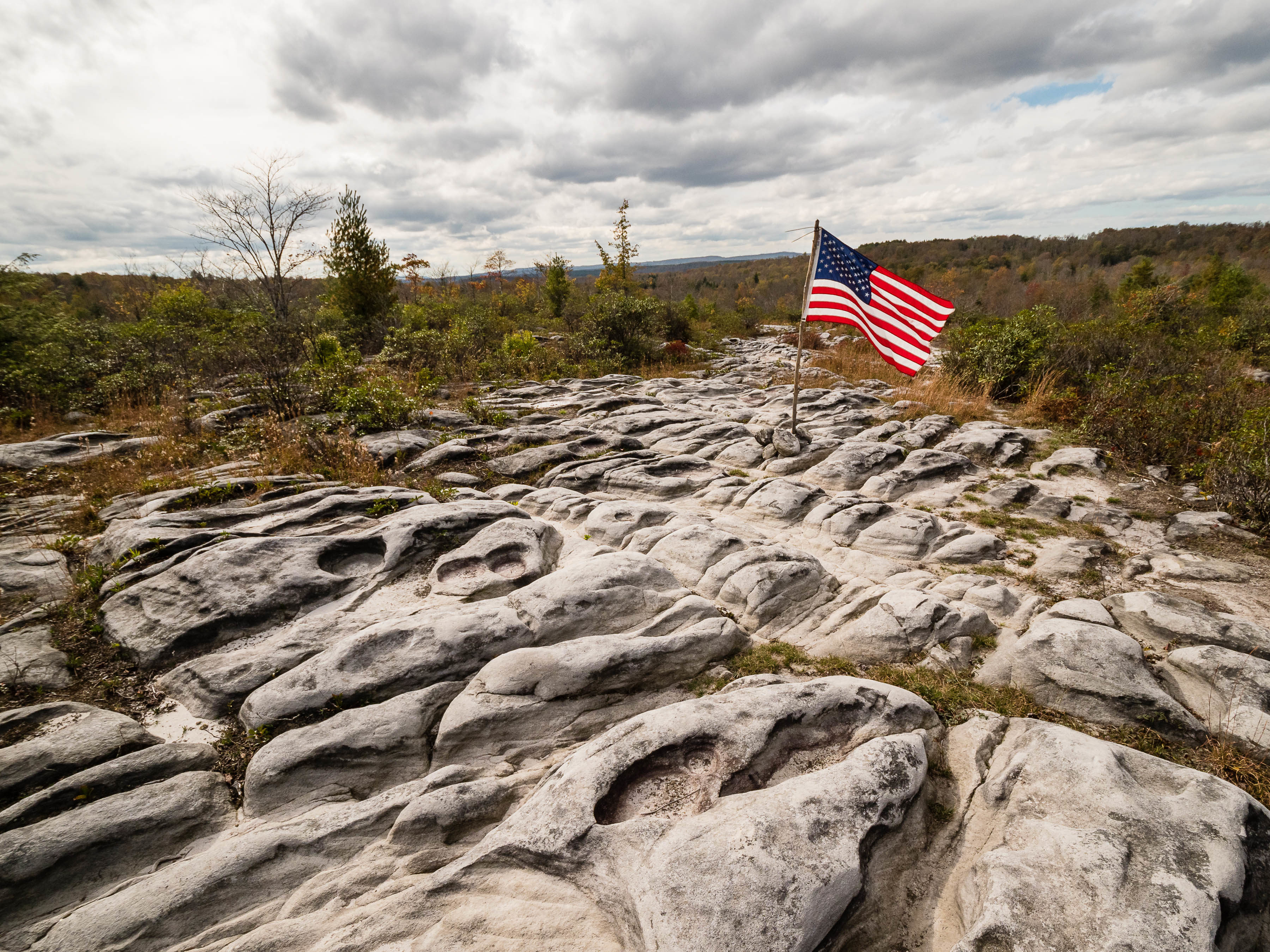 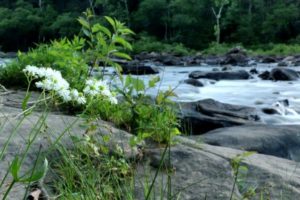 Fund that Helps Protect Iconic WV Sites is in Question (Click here for the article)
by: Public News Service 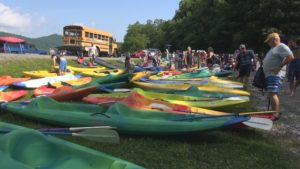 Meet the Cheat brings more than 300 paddlers to Tucker County (Click here for the story)
by: WBOY 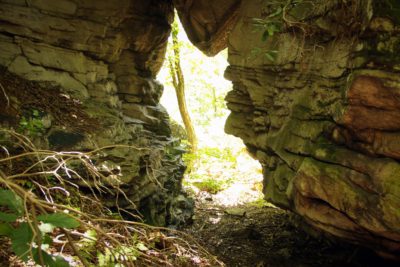 Needleseye Celebration on May 19th

END_OF_DOCUMENT_TOKEN_TO_BE_REPLACED 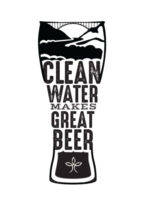 “Saving the world one sip at a time…” (Click here to view article)
by: The Daily Athenaeum 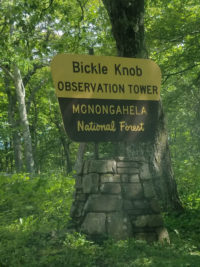 Save the View: Open House

Save the View: Bickle Knob 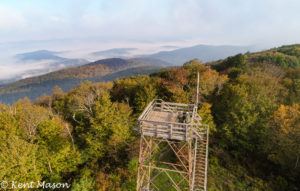 A new destination for outdoor enthusiasts has just been permanently protected in Fayette County.

The West Virginia Land Trust has partnered with the City of Oak Hill to purchase 283 acres of land from the Berwind Land Company for public recreational use. This property will be the future site of the Oak Hill Needleseye Boulder Park, to include rock climbing, hiking trails and mountain biking.

END_OF_DOCUMENT_TOKEN_TO_BE_REPLACED

Just south of Morgantown, near Little Falls, sits an 84-acre mature forest, known as Elizabeth’s Woods Nature Preserve. In 1995, Elizabeth Zimmermann donated the property to the West Virginia Land Trust (WVLT) to be managed as a natural area available to the public for hiking and nature study. More than 20 years later, the land trust is tripling the size of the preserve and eyeing a way to open the property to the public.

END_OF_DOCUMENT_TOKEN_TO_BE_REPLACED

SnapShots: Summer Newsletter 2017
Protecting special places one acre at a time… in this newsletter read about the additional 938 acres we recently protected!
Click here to read the newsletter!
WordPress Lightbox Plugin