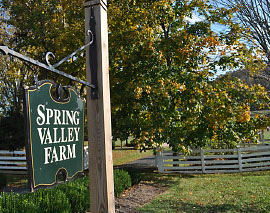 Monroe County, W.Va. – More than 600 acres in Monroe County have been protected by an agreement between The West Virginia Land Trust and a family who has owned the property since 1776, the year the United States declared its independence from the British Empire.

Spring Valley Farm, an historic home and property located along U.S. Route 219 near Union, has been owned by the Dickson family since it was settled nearly 250 years ago. Page Dickson protected a majority of the property in 2012 by donating a conservation easement to the land trust. The remainder of the property, owned jointly by Page Dickson, and her niece and nephews, Sarah, Joseph and Richard Dickson, was permanently protected under an agreement signed in early December.

“In 1776 Richard Dickson settled on 185 acres and the original family log cabin was built here. Every generation after has cherished the beauty and serenity of this place. I want to make sure that future generations can enjoy what we have been so fortunate to inherit,” said Page Dickson.

Located on Route 219, the farm serves as a gateway into the history and rural culture of Monroe County. Nearly two miles of Second Creek, fed by the third largest spring in West Virginia, winds its way through the farm. In its early history, the creek hosted more than twenty mills for powder, grist, lumbering, and finishing. Today, the creek is a popular canoe and kayak run, as well as a renowned trout fishing stream. Remnants of mills and other historic structures are still visible along the stream banks.

“One of the motivating reasons we wanted to seek permanent protection of the property was to preserve the scenic and agricultural character of the land,” Dickson said.

While the original 185-acre parcel was settled in 1776, the Dickson family acquired the remainder of the property in 1837. The property’s location along U.S. Route 219, a historic turnpike that connected the Greenbrier and New River Valleys, made it a popular stop for travelers, including Henry Clay, a prominent figure in early American history and founding member of the Whig Party.

“I’m thankful to the Land Trust for all of the work that’s been done toward fashioning this easement so that our land and its history can be preserved and protected,” said Joe Dickson, part-owner of the property. “The fact that our family has held on to the original settlement for so many generations is extremely rare. The exceptional beauty and seclusion of the area makes the land worth saving from development,” he said.

The West Virginia Land Trust works with landowners who voluntarily seek ways to protect their land from development and who are interested in maintaining the natural and historical characteristics of their property. One way of achieving this protection is through the use of a deed of conservation easement that places permanent protections on the land.

“Our work with the Dickson family has been very rewarding”, said Brent Bailey, Executive Director for the land trust. “We spent several years working with the family to develop an easement that reflected their vision and our desire to ensure that Second Creek and the Spring Branch, scenic views, and the agricultural landscape remain unspoiled for years to come. Now and forever, when you enter Monroe County from the north, you will be greeted by the unspoiled beauty of Spring Valley Farm.”

Spring Valley Farm was originally listed on the National Register of Historic Places in 1974.